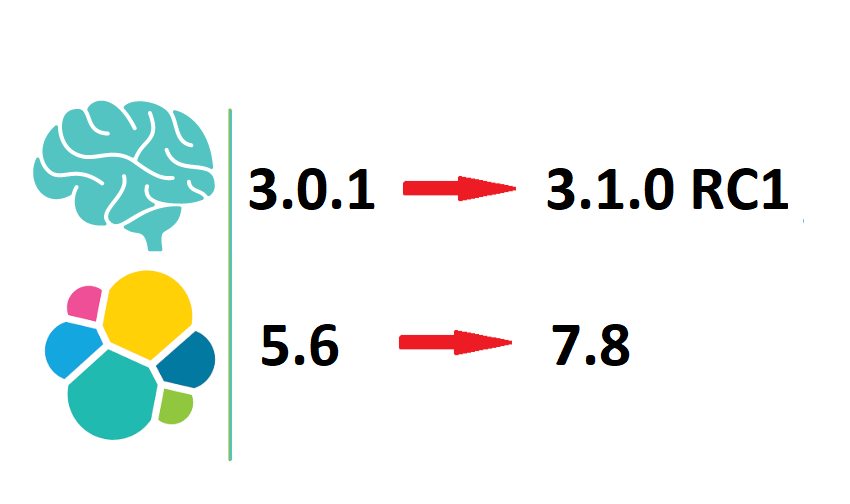 In my last post, I covered how I went about upgrading TheHive from 3.4 to 3.5RC1 along with a double upgrade of Elasticsearch. Well now its Cortex’s time. Cortex 3.1.0 also uses Elasticsearch 7.8 so we are in for a similar upgrade process.

Depending on your reliance on Cortex it may be a nice addition to TheHive that is rarely used, or it may be critical to your operation. Either way, getting to the latest version is desirable as there are always welcome bug fixes and improvements with error handling, reporting and general integration.

RC versions of Cortex are considered beta / pre-releases and are not suitable for production use as there may be unresolved or introduced bugs.

Use this guide at your own risk, and take precaution to look after your data and always test your upgrades on a duplicated instance so that you are familiar with the steps involved. That being said, I documented my steps, ironed out issues I came across and then did this upgrade a second time to test it out.

I am also no Elasticsearch expert, so my settings and steps may or may not be optimal.

This guide assumes that you running only Cortex on a single non-clustered server.

Prior to starting anything, be very sure and clear about what components are currently installed. For Cortex, this is as simple as doing an About from the interface. My current environment looks like this: 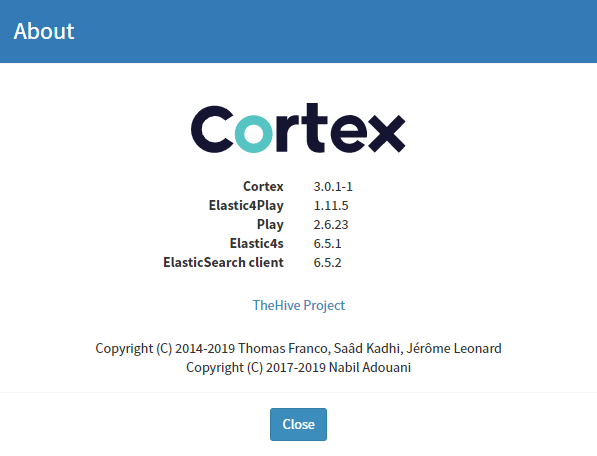 To check your current version of Elasticsearch drop to a shell where your Elasticsearch instance is and execute the following command:

Now is a great time to perform a backup and snapshot of your server, just in case you need to roll back.

First, create a backup of your Elasticsearch configuration.

My setup already includes the backup folder location and configurations for Elasticsearch, so skip that part if necessary. If you have not performed a backup, these are the steps to follow:

Create a backup folder location with the following command:

Now you will need to restart the Elasticsearch service if you updated the elasticsearch.yml file with the following:

To perform the backup we need to get the index details, you do this by performing a web request to your Elasticsearch instance which may or may not be same box. Note the index in this case is cortex_4. The number refers to the schema version.

To register a snapshot use this command.

Create the backup by using this command (replace <INDEX> with the index identified earlier, in this case it will be cortex_4). You may also need to change your snapshot name <snapshot_2> if it already exists:

As I am using Hyper-V as my virtualisation layer, I have also created a snapshot of the server at this point for worst case failure. The same principals apply for esx-i, XenServer, VirtualBox, ProxMox etc.

Use the following command to disable shard allocation. My understanding is that this should not be required if we are running in a single node configuration as per Cluster Level Shard Allocation

If prompted that the elasticsearch.yml has been modified select N

In my case I did not have any plugins to upgrade. But these are the commands to use:

Comment out the line for script.inline: true as it is not required.

Find the path of your JavaJDK installation. For me, my installation was in /usr/lib/jvm/java-8-openjdk-amd64

Update /etc/default/elasticsearch and uncomment the JAVA_HOME setting and add your java path in. ie:

Update the permissions of the /etc/default/elasticsearch file

If you attempt to restart Elasticsearch at this point, the service will fail with the following error:

This can be corrected by fixing the permissions on the file.

Use the following commands to enable Elasticsearch on restart and to manaully start the service now:

Check that ES is running

Now with all the required Elasticsearch configuration completed, all going well you should be able to execute the following command to check the installation. Note that the version is now 6.8.12.

If you try this command before Elasticsearch has had a chance to start fully you will see this error. Try it again after a few seconds:

You can start Cortex with the following commands:

At this point, we have completed the first part of this process…upgrading ElasticSearch from 5.6 to 6.8. Test that you can login to Cortex without and issues and perform some basic sanity tests.

It is advisable to create a snapshot of your server at this time before you progress to the next part of the upgrade.

Having the jq package installed makes parsing json formatting so much easier!

Identify if your index should be reindexed

As my original installation of Cortex was done under ES 5.6 environment, my data will require a reindex so that it can be read by ES 7.8. If you started your journey with Cortex prior to version 3.0 then there is a fairly good chance that this is going to be required. This can be confirmed by running the following command:

If you are showing 5.6.x then you will need to perform a reindex.

Make a note of the current indices on you Elasticsearch instance

We need to create a new index with the same settings as our existing index. Using the official migration guide from TheHive has this command with \ separated lines. I found that this did not create the index correctly and threw an error error: syntax error, unexpected INVALID_CHARACTER (Unix shell quoting issues?) at <top-level>, line 1:

Stripping out the \ line breaks and running it as a single line command did the trick for me.

Confirm new_cortex_4 index has been created

Note that the docs.count for the new index is 0. At this time we have only created a new index.

If you receive json data that contains failure, DO NOT PROCEED, there is a good chance that the migration stopped on the first error. To start with, check the command you used create new_cortex_4. Use a tool such as Kaizen if you are unfamiliar with querying Elasticsearch from a curl command. Check that the database schema was created correctly.

Check the status of the reindex with the following command:

Note that the docs.count match. If there was an error these values would not match and you would have data loss.

Now we have confirmed that the docs.count values match and that the reindex was a success, delete any old existing indexes with the following command:

IMPORTANT: Elasticsearch will not start if there is an index that was created in an older version of ES.

Confirm this with the following command:

When I started ES 7.8 on my first run, I started getting warnings about JDK8, so I thought i’d upgrade it prior.

It can upgrade it with the following command:

Keep going, were nearly there!

Create a backup of the elasticsearch.yml file with the following command:

Once again, I beleive that this only applies to clustered environments.

We must stop Elasticsearch in order to upgrade it. Use the following commands:

Use the following commands to upgrade Elasticsearch to 7.8

If prompted that the files have been modified select N. I was prompted about the following files:

Now that we have updated JDK to version 11, we need to update the /etc/default/elasticsearch file and change the JAVA_HOME setting from java-8 to java-11.

In my case I did not have any plugins to upgrade

Check the fingerprint of the key

Having to sudo every docker command on the command line is annoying and may not allow Cortex to run its analyzers and responders, so create a docker group and add the cortex user into it. You will need to logoff and on again for the group to re-evaluate.

For my particular installation I have used the extracted binaries, so I used the following steps to upgrade. At this time double check that the cortex service is still stopped.

Copy over the existing application.conf file

As my Cortex installation runs under the cortex user account, the cortex user needs to own the files/directories so that it can start successfully. After Extracting the files the owner was root so when I started Cortex the service exited with an error.

Now we have extracted the binaries, updated the Symlink and recopied over the application.conf file, the last step is to start Cortex and perform a DB update.

Its at this point Cortex is on the latest version of 3.1.0 RC1. The migration notes for TheHive made a mention that there should be a cortex_5 index in elasticsearch as a result of this upgrade, and this was something that I was just not seeing. I retraced my installation, reverted snapshots, attempted to manually trigger the DB maintenance process, re-tried my installation, performed a clean build of Cortex 3.1.0RC directly. I even deleted the existing Cortex indexes in elasticsearch. Everytime, all the logs indicated cortex_4. I reached out to the @TheHive-Project who advised there is a typo in that particular guide. You know what though? I learnt a little more about Cortex as a result of all the troubleshooting and rebuilding.

Login to Cortex and check the version. You should now be on the latest beta. 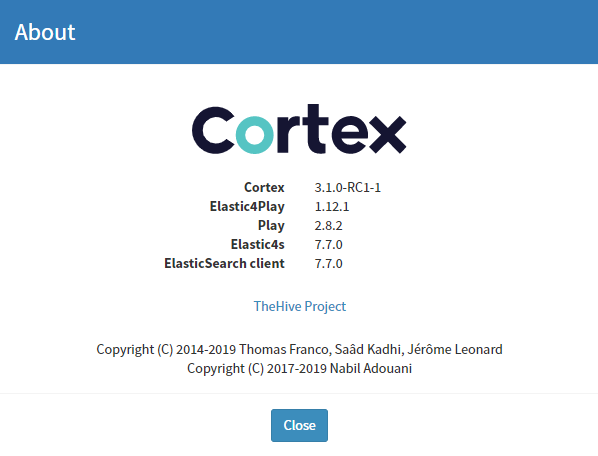 It is at this point that you should also login to TheHive and check that you can still run analyers and responders.

Just as TheHive upgrade, its a fairly lengthy upgrade process. But if you have upgraded TheHive, then 90% of the process is the same. I would still advise to stand up a test system, restore live data to it and try it out under safe conditions. Once Cortex 3.1 comes out of Release Candidate, upgrading it should be just a matter of upgrading the binaries. This guide should still be relevant if your not going to the RC first.