Last month in AWS saw me rack up a bill of US$3.52 and while I expected this to be lower compared to last month, it turns out I got a little trigger happy with EC2 and S3. This was primarily due to the Detection Lab infrastructure that I was playing with. EBS stored volumes caused by AMI’s will cause your bill to shoot up quite quickly. 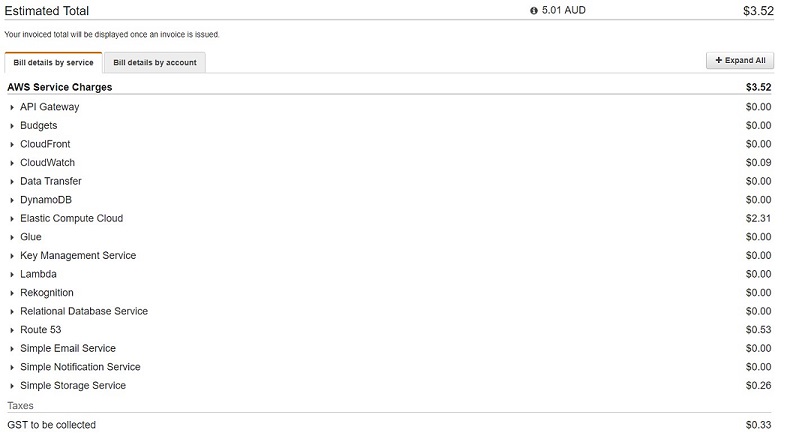 I was also still performing some other lab based stuff and introduced SES into my permanent list of services ill be using.

The following were the services I actually had to pay for outside of the Free Tier.

This was by far the biggest cost this month with EC2 EBS snapshots being the main contributor here. Ive since removed the AMI’s that were the source of these snapshots as ive decided that I would run the detection lab locally on my machine and only rely on the cloud instance if required. Spot instances are the way to go if you can deal with being shut down in short notice.

Route53 was my second highest cost for the month again. The cost really is negligible, and I cant really see the query cost exceeding $0.05/month any time soon.

Given that im currently storing around 30Gb of data in S3, and im running a static website on S3, im expecting more costs to be had in this area.

This is an area that I wasnt expecting a cost in. The cost relates to “standard resolution”. My understanding is this is 5 min interval monitoring which could relate to the EC2 instances I had.

GRAND TOTAL: $3.52 Which with the poor conversion works out to be AUD$5.01. For March, I think things will settle down. Ive had my focus taken away from AWS which will limit the things I do there for the time being.