What a crazy year its been for me. It started off with migrating my blog from WordPress to Hugo and setting up some additional AWS services to complement my domain and completing a few AWS based labs off the back of the AWS Certified Cloud Practitioner exam I sat in late 2018.

I then started looking at some open source tools namely, Chris Long’s Detection Lab and Quasar RAT before starting a new role which mixed things up in a good way.

In April, out of necessity I started what ended up being a 12 section blog series about TheHive, Cortex and MISP and how to install, configure and upgrade each along the way. Midway through this series I went quiet for a few months as I started to break in new work routines and responsibilities. By the time I completed the series it was October and had gained some attention from TheHive devs who were thankful for the contribution I was making. More content around TheHive is planned in the new year.

I got a few retweets about the content I was posting, and this blog started to pick up some steam as a result. I have had plenty of visitors particularly in the last few months which I am grateful for. The numbers may still be small, but I really do get a buzz from each visitor that comes along. I hope you return in the new year!

And visitors have been from across the globe and not just local. 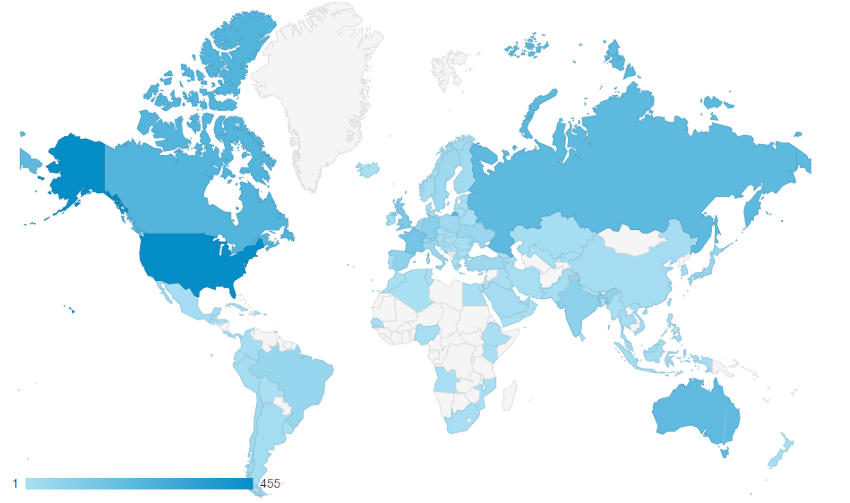 My hope for this blog is that I am able to explain things in a way that can be useful for anyone who reads it.

I’ve also picked out a tools along the way like the GoPhish framework, Kaizen, MailTrap, Fail2Ban, LaZange, Serverless screenshots and Microsoft PowerAutomate and documented how ive set them up and used them in a way that has helped other projects along the way. I’ve kicked off some blogs about more open source tools such as NodeRED and how to use it with TheHive and hoping to add even more to the list in the new year.

I’ve blogged about my experience with starting a work journal, creating documentation as code, listed the podcasts I listen too (i’ve added more since!). I’ve detailed how to get an A+ rating on Mozilla Observatory and Qualys SSL Labs, as well as adding reCaptcha to a website using AWS Lambda. All these things have taken time as i’ve read the docs, spun up the system, played with it, pulled my hair out troubleshooting, rebuilt it, tore it down, and documented it in the hope that hopefully my instructions can help you along your way. Many snapshots were harmed in the making of such posts.

Python and NodeJS are now scripting languages ive added to my toolkit on top of PowerShell. While I might be n00bish at these, you can never stop learning.

There has been a few short opinion pieces which I hope to continue in the new year, but for now, i’ll be taking a break until the new year on the technical stuff as I get back into the hiking season over the Christmas and new years break. I hope to bring some write ups about these walks that will surely kick my ass with the planned frequency and intensity I want to do them at.

I hope you have enjoyed this blog, and please feel free to reach out to me. Until then, Merry Christmas, Happy Holidays or insert your own holiday greeting here. Stay safe, have fun and I’ll be back in 2020.